Let’s say our app has 3 environments - development, staging and production. We might have different configs for each of these environments like backend endpoints, analytics api keys, error reporting api keys, settings like turning off debug logs in production environment etc. 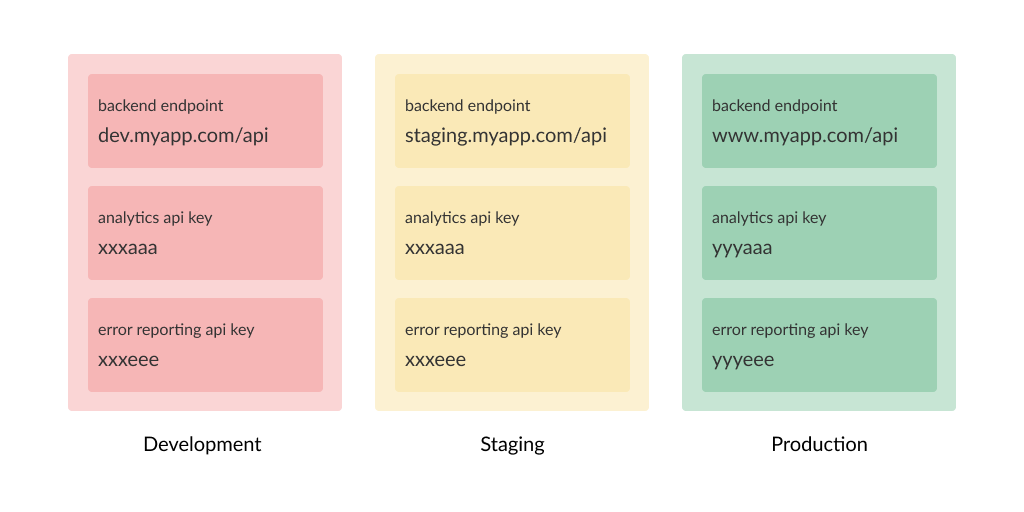 There are three common ways to manage these configs:

Let’s talk about each of these approaches and their pros and cons.

In this approach, a separate bundle (or docker image) is created for each environment and the config values for that environment is injected into the bundle using “environmental variables”. Of course, there’s no such thing as environment variables in frontend so it’s usually mimicked using global variables.

If you’re using webpack, create-react-app or vue-cli etc, you can access the config value as process.env.YOUR_CONFIG_NAME etc

Alternatively, we can store the configs for all environments in the source code and dynamically load the appropriate config for each environment. Usually, different environments would have different urls and we can use this to load the correct config.

Let’s say we have 3 environments - development, staging and production, which have the following urls - dev.myapp.com, staging.myapp.com and www.myapp.com respectively.

We can use window.location.hostname to decide which config to load in runtime:

This can be consumed in the application as

Generally, frontend builds don’t take much time so it’s easy to deploy config changes to users within minutes. But sometimes you might need to change the config from backend:

Despite these advantages, the fact that we’re fetching these from backend complicates things - we need to design the code/interface with latency in mind and implement caching in a way that it doesn’t erode the advantages mentioned above. This approach is commonly used alongside either of the first 2 approaches.